Welcome to Music Friday when we bring you great songs with jewelry, gemstones or precious metals in the lyrics or title. Today, the incomparable Stevie Wonder performs “Stay Gold,” a beautiful ballad he co-wrote for the 1983 cult movie classic, The Outsiders. 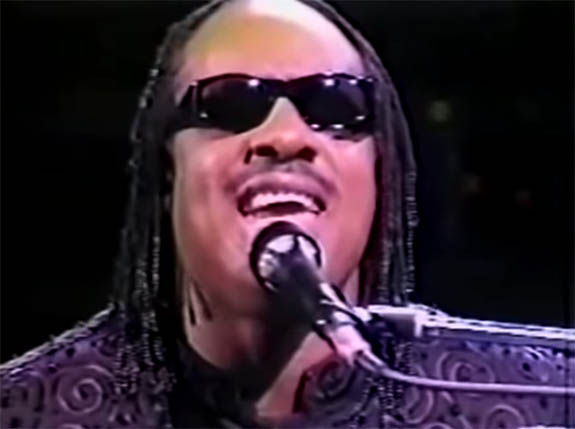 In the song inspired by Robert Frost’s 1923 poem, “Nothing Gold Can Stay,” Wonder uses the lustrous metal as a metaphor for the precious, yet fleeting, vitality of youth.

“Stay Gold,” which runs during the opening credits of The Outsiders, starts with these memorable lyrics: “Seize upon that moment long ago / One breath away and there you will be / So young and carefree / Again you will see / That place in time… so gold.”

The Outsiders was adapted from a 1967 novel by teenage author S.E. (Susan Eloise) Hinton, who based the story on her own experiences in an Oklahoma high school, which was divided by rival gangs, the hardscrabble Greasers and the wealthier Socs (pronounced “soashes”).

The movie has become a cult favorite, partly because Hinton’s book is required reading in many high schools, but mostly due to the fact that every teenage actor in the cast went on to become a Hollywood A-list heartthrob. The cast included Patrick Swayze, Rob Lowe, Ralph Macchio, Emilio Estevez, C. Thomas Howell, Matt Dillon and Tom Cruise.

The Robert Frost poem, “Nothing Gold Can Stay,” plays a vital role in the film. Ponyboy (played by Howell) reads the poem to the injured Johnny (Macchio) while they are in hiding. “Stay gold” are Johnny’s last words before he dies. Later in the film, Ponyboy finds Johnny’s interpretation of the Frost poem: that beauty and innocence are transient and must be guarded like gold.

While Wonder penned the lyrics to “Stay Gold,” the music was composed by Francis Ford Coppola’s father, Carmine, who also contributed the memorable, original music to a number of his son’s other blockbuster films, including The Godfather trilogy and Apocalypse Now.

Born Stevland Hardaway Morris in inner-city Detroit, Wonder was a child prodigy and musical genius — despite being blind since infancy. His first instrument was a harmonica and he was a skilled musician by the age of eight.

He was discovered by Ronnie White of the Miracles at the age of 11 and was quickly signed to a five-year Motown contract by CEO Berry Gordy. Billed as Little Stevie Wonder, the singer/songwriter/musician was an instant sensation.

Now 70, Wonder has performed for six decades. Over that time, he has amassed 30 U.S. Top-10 hits, received 25 Grammy Awards and has sold more than 100 million records worldwide. Rolling Stone magazine ranked him ninth on its list of the greatest singers of all time. Wonder is a member of both the Rock and Roll and Songwriters Halls of Fame.

Please check out Stevie Wonder’s live performance of “Stay Gold.” The lyrics are below if you’d like to sing along…

But can it be
When we can see
So vividly
A memory
And yes you say
So must the day
Too, fade away
And leave a ray of sun
So gold