Back in 2016, Gwen Stefani musically declared her love for boyfriend and country star Blake Shelton by comparing him to a sapphire in her sweetly smitten confessional, “Rare.”

She sang, “You’re a sapphire, you’re a rolling stone / You’re a sparkle in a deep black hole / You’re like moon shine, when the curtains close / You’re my answer, one that no one knows.”

Now four years later, Shelton has returned the sentiment in a big way by popping the question with a head-turning diamond ring. Jewelry-industry experts placed the diamond weight at somewhere between 6 and 10 carats, and the ring’s value in the range of $500,000 to $800,000. The white metal is likely platinum, and the stone shape seems to be either round or oval. 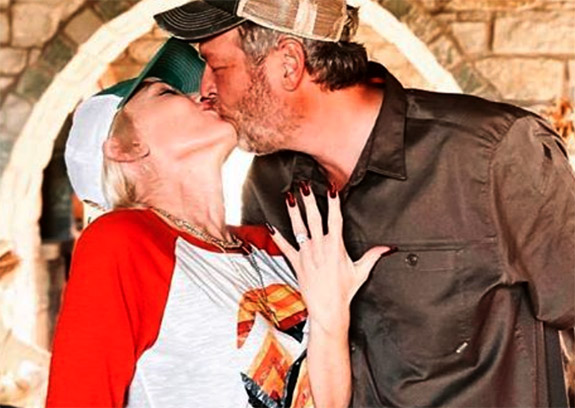 On Tuesday, Stefani’s 10.6 million Instagram followers were the first to learn about her engagement via a photo showing her and Shelton sharing a kiss. By zooming in, we can see that the diamond is nearly the width of her finger.

On Shelton’s Instagram page, which has a following of four million fans, the 44-year-old posted the exact same photo and added this sweet message, “Hey @gwenstefani thanks for saving my 2020… And the rest of my life.. I love you. I heard a YES!”

Hopefully, the social-media-savvy couple will be following up their announcement with clearer, closeup shots of Stefani’s new bridal jewelry.

Stefani, 51, and Shelton, 44, began dating in 2015 while they were judges on NBC’s The Voice. Throughout the next five years, the rumor mill buzzed with news of a pending engagement.

On Tuesday, the couple’s followers finally got their wish. According to US Weekly, Shelton asked Stefani’s dad for his blessing before popping the question to his daughter. An insider told the magazine that “it meant so much to Gwen that Blake was so traditional about it.”

The Voice coaches have yet to announce a wedding date.