Using a wire hanger and a snake cam, Stockton, CA, resident Danny Gutierrez deftly fished his wife’s engagement ring from the “plumbing cleanout” pipe in their backyard. The successful rescue mission took place three weeks after the ring — wrapped in a tissue — was accidentally flushed down the toilet.

The family was so determined to get the ring back that they sacrificed running water so the ring wouldn’t be forced farther down the sewer line.

The saga began when Angela Gutierrez’s diamond engagement ring ended up on the bathroom floor while she was getting ready for a Zoom call. Her 7-year-old son noticed it and, in a considerate attempt to protect the ring and keep anyone from stepping on it by mistake, wrapped it in tissue and placed it on the sink.

When Danny Gutierrez happened upon the tissue wad on the sink, he tossed it in the toilet and flushed it down.

After her Zoom call, Angela went to retrieve her ring and was told by her young son how he had found it on the floor. Then Danny filled in the rest of the story about how the ring had been flushed.

The family hired professional plumbers to find the ring, but their efforts came up empty. Still, the couple refused to give up.

In a last ditch effort to locate the ring, Angela used a snake camera to peer down her home’s “plumbing cleanout.” This is an access pipe in their backyard that would typically be used to access the sewer line in the event of blockage.

As she viewed the monitor, she was certain she saw the glint of her ring. 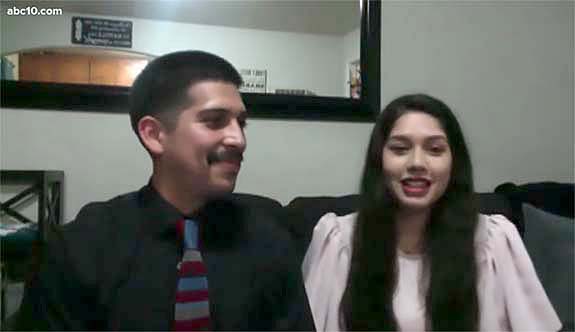 “It was as clear as day,” Angela told the local ABC affiliate. “I’m like, ‘Oh, my goodness! Danny’s gonna think that I’m crazy.'”

In a home video shot by Angela and shared by ABC10, Danny carefully maneuvers a wire hanger and a snake cam into the pipe.

“I was so nervous and I had to look away,” Angela said. 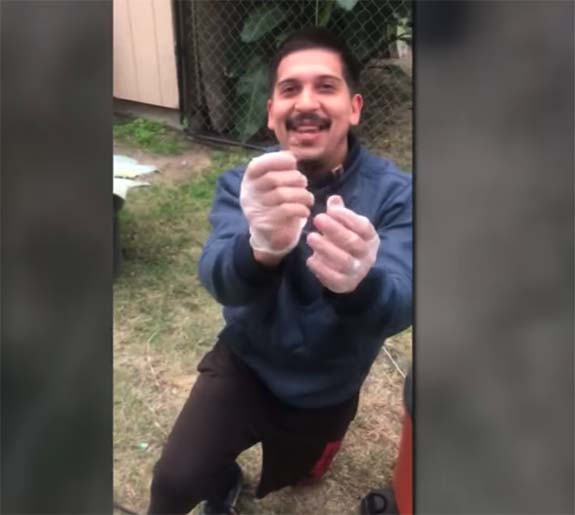 With the ring in hand, Danny instinctively went down on one knee and said to Angela, “Will you marry me?”

Later, Angela told ABC10 that it was hard to believe that she got her ring back after three weeks.

“We were slowly coming to accept the fact that we lost it,” she said. 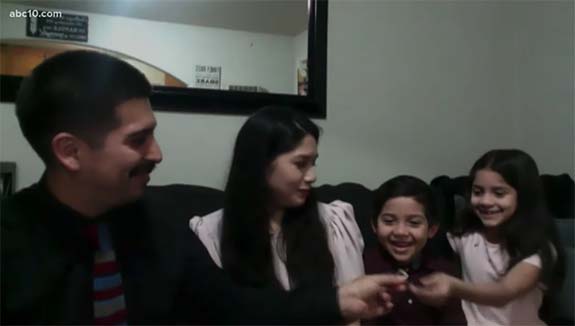 Please check out ABC10’s report. It ends with a short scene of the children learning the happy news about their family’s cherished keepsake.