Set With 804 Gems, LA Lakers’ Championship Rings Are the Most Elaborate in NBA History

The LA Lakers received their 2020 championship rings — the most elaborate in NBA history — on Tuesday night before their home opener at the Staples Center. Designed by Jason of Beverly Hills with an assist from streetwear designer Don C, each ring glistens with 180 grams of yellow gold and 804 gemstones. It also conveys the narrative of a season like no other. 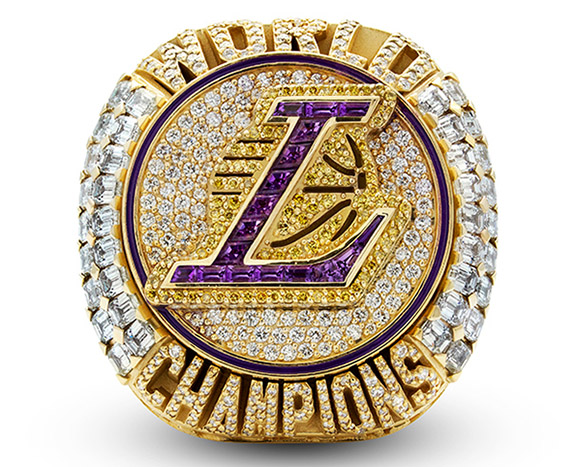 The gemstones — which include white diamonds, yellow diamonds and purple amethysts — weigh a total of 16.45 carats.

The face of the ring features a prominent Laker “L” logo rimmed in gold and filled with 17 custom-cut amethysts weighing .95 carats. The number 17 represents the number of NBA titles won by the franchise (tied with the Boston Celtics for the most in league history) and the .95 carats represents the 95 days the team spent in the “bubble,” the Walt Disney World facilities in Orlando where all the playoff teams competed due to COVID-19 restrictions.

The yellow diamonds outlining the “L” filling the basketball of the Lakers’ logo weigh exactly 0.52 carats, a nod to the team’s 52 regular season wins.

One of the most unique features of the ring is a ball-bearing-enabled removable top that, when opened, reveals a graphic representation for the Staples Center rafters — every one of the franchise’s retired jersey numbers superimposed over a black mamba pattern. Among the retired numbers are 8 and 24, the ones worn by Kobe Bryant, the beloved Laker who tragically passed away January 26 in a helicopter accident. Black Mamba was Bryant’s nickname.

The shoulder of the ring displays the jersey numbers of every player who suited up for the Lakers during the 2019-2020 season. Each number is spaced by a tiny Larry O’Brien championship trophy.

On one side of the ring is the player’s name and number written in raised gold letters. A Black Mamba snake seems to be wrapping itself around the player’s number. Also incorporated into the design is the Lakers’ playoff slogan, “Leave A Legacy,” in LeBron James’ own handwriting. 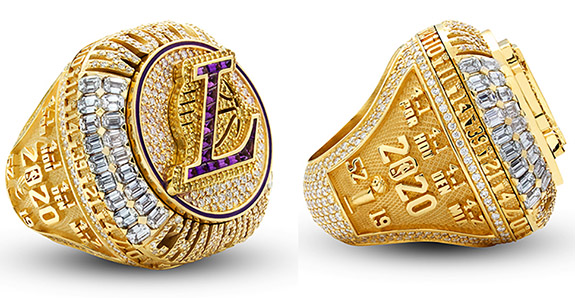 The other side of the ring shows the team’s playoff series records against Portland, Houston, Denver and Miami, along with the team’s regular season record (52-19), the Larry O’Brien trophy, the year and the NBA symbol tucked into the first zero of 2020.

A unifying theme is the snakeskin-textured background behind the graphics on the right and left sides of the ring.