Cut from a 240-carat rough stone found in 1951 at the Premier Mine in Transvaal, South Africa, the “Victoria-Transvaal Diamond” is one of the most prized possessions in the Smithsonian’s National Gem Collection. Today’s virtual tour of the Janet Annenberg Hooker Hall of Geology, Gems, and Minerals takes you right to the case where the 67.89-carat champagne-colored gem is featured in a stunning necklace and positioned alongside many other famous colored diamonds. 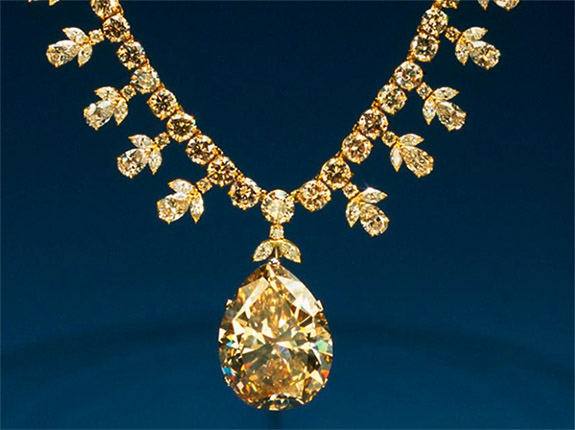 Originally called the “Transvaal Diamond” to honor its place of origin, the gem was claimed by timber baron Leonard E. Wilkinson after he placed the winning bid of $430,000 at a Palm Springs, CA, auction in 1976. (That sum is equivalent to about $2 million in today’s dollars.) He later renamed the stone as a lasting tribute to his wife, Victoria.

Until this past spring, hoards of excited gem lovers would have been lining up to see the Victoria-Transvaal Diamond in person. But with all the Smithsonian museums in Washington, DC, remaining temporarily closed to support the effort to contain the spread of COVID-19, we’ve been presenting these virtual tours.

Previous stops on the tour have included the “Carmen Lúcia Ruby,“ “Chalk Emerald,“ “Gifts from Napoleon,“ “Stars and Cat’s Eyes,“ the “Logan Sapphire,“ the “Dom Pedro“ aquamarine, the “Steamboat“ tourmaline and a grouping of enormous topaz.

Here’s how to navigate to the exhibit called “Diamonds.” The second display in the case is the Victoria-Transvaal Diamond.

The resulting page will be a gallery called “Geology, Gems & Minerals: Precious Gems 1.”

— Next, click the double-right-arrow once to navigate to the gallery called “Geology, Gems & Minerals: Precious Gems 2.” 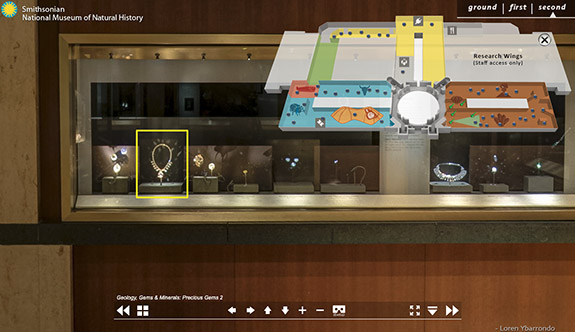 When you arrive, the foreground on the center-left of the screen will be filled with a topaz exhibit. To the right of the topaz case, on the far wall, is a wide showcase called “Diamonds.”

– Click and drag the screen slightly from right to left and then touch the Plus Sign to zoom in. There you will see the Victoria-Transvaal Diamond Necklace. In the screen capture, above, we have the necklace highlighted in a yellow box.

The Victoria-Transvaal Diamond Necklace shares its case with some of the most famous diamonds in the world, including the 30.62-carat Blue Heart Diamond, the 18.30-carat yellow Shepard Diamond and the super-rare 5.03-carat DeYoung Red Diamond.

Our champagne-colored featured diamond originally had been cut to 75 carats, but then trimmed to its current weight of 67.89 carats to improve its proportions and brilliance. The natural fancy brown-yellow diamond boasts 116 facets and a clarity grade of VS2. 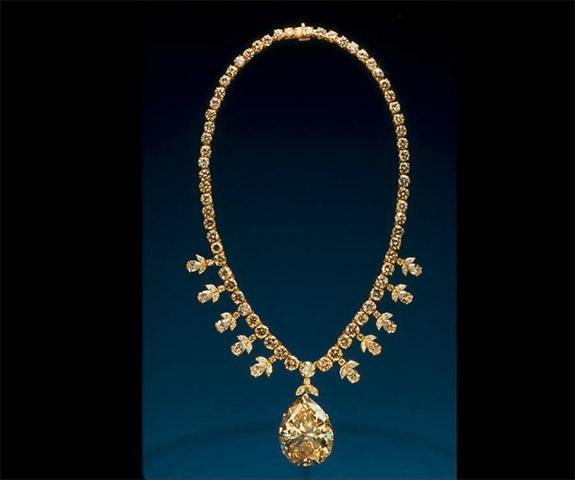 The pear-shaped stone is set in an elaborate necklace highlighted by 106 diamonds weighing approximately 45 carats. Baumgold Brothers Inc. is credited with designing the yellow gold necklace, which is fringed with 10 drop motifs.

Leonard Wilkinson made his fortune in the timber industry. At its peak, his milling business — Coin Millworks — was turning out 320,000 board feet of pine lumber per day and 20-plus railroad cars of finished millwork per week.

Trivia: The Victoria-Transvaal Diamond made its silver screen debut in 1952’s Tarzan’s Savage Fury. Tarzan’s love interest, Jane (played by Dorothy Hart), wears the diamond near the end of the film.

The Victoria-Transvaal Diamond Necklace was generously gifted by the Wilkinsons to the Smithsonian in 1977.