Here’s a birthstone riddle for the month of August: What do the world’s largest faceted peridot and the Brooklyn Bridge have in common? 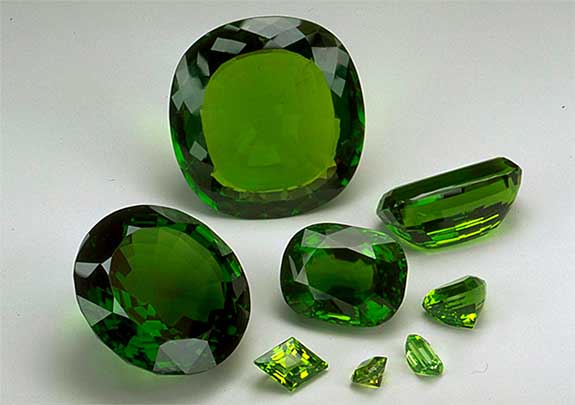 If you’re stumped, a little background may help…

About the Peridot
The 311-carat faceted peridot (shown in the grouping, above) is currently part of the Smithsonian’s National Gem Collection in Washington, DC, but originated on Egypt’s Saint John’s Island in the Red Sea.

As early as 1500 B.C., ancient Egyptians mined peridot on that same island (then known as Topazios) and anointed the vibrant green stone as the “gem of the sun.”

Legend has it that miners on the island worked day and night to collect the green gems for the Pharaoh. Nighttime mining was possible because of the way the gems reacted to lamp light in the darkness. It is also believed that many, if not all, of Cleopatra’s emeralds were actually deep green peridot stones from the Topazios mines.

While nearly all of the peridot that you see in your jeweler’s showcase was born deep within the Earth’s mantel, it’s also first gem to be discovered on another planet. The Mars landing of 2003 revealed that green peridot crystals — in the form of the gem’s less-precious cousin, olivine — cover about 19,000 square miles of the Red Planet’s surface. 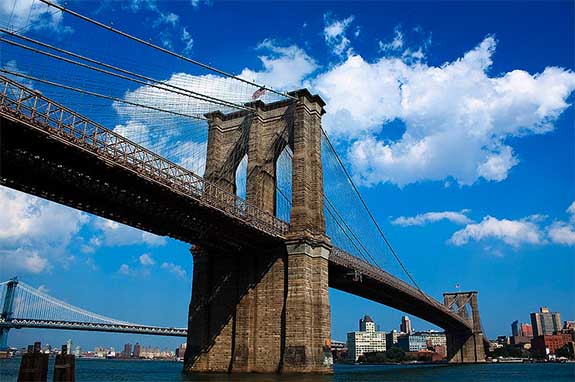 About the Brooklyn Bridge
The Brooklyn Bridge was one of the most impressive engineering feats of the 19th century. Designed by John A. Roebling, the world’s largest suspension bride at that time would span 1,595.5 feet, linking Brooklyn and Manhattan. The 14-year project was started in 1869, the same year Roebling would pass away at the age of 63.

Roebling’s son, Washington, supervised the construction of his dad’s vision, with the assistance of his wife, Emily. On May 24, 1883, the Brooklyn Bridge was unveiled to the world during a celebration attended by President Chester A. Arthur, Gov. Grover Cleveland of New York and hundreds of thousands of curious onlookers. Circus promoter P.T. Barnum famously displayed the strength of the bridge by leading 21 elephants across it.

What’s in Common?
What few people know about Washington Roebling was that the world famous civil engineer was an avid collector of rocks and minerals. Upon his death in 1926, Roebling’s collection of 16,000 specimens and an endowment of $150,000 for its maintenance were donated by his son, John A. Roebling II, to the Smithsonian Institution. The collection, which included the world’s largest faceted peridot, would became an integral part of the National Gem Collection.

So, what connects the famous peridot with the famous bridge? Washington Roebling.