Occupying one of the most highly trafficked locations in the Janet Annenberg Hooker Hall of Geology, Gems, and Minerals in Washington, DC, is an obelisk-shaped aquamarine that is widely recognized as the masterwork of Bernd Munsteiner, an Idar-Oberstein-based gem cutter, who has been called “The Picasso of Gems” and “The Father of the Fantasy Cut.” 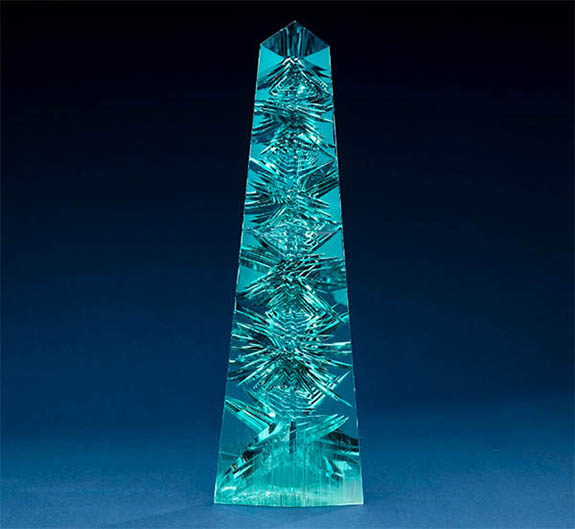 The 10,363-carat “Dom Pedro” is the world’s largest faceted aquamarine and one of the most recognizable treasures from the Smithsonian’s National Gem Collection, which dates back to 1884.

With all the Smithsonian museums in Washington, DC, still closed in an effort to contain the spread of COVID-19, we offer our second virtual guided tour of the gem and mineral galleries of the National Museum of Natural History.

Visitors to the actual museum will have no trouble locating the 14-inch-tall Dom Pedro. It’s just 30 feet from the Hope Diamond at the entrance of the exhibit. It occupies its own case alongside a wall panel that introduces visitors to “The Treasures From National Gem Collection.” The panel explains that the 7,500-plus gemstones in the collection range in size from less than a half-carat to 23,000 carats. The panel also notes that virtually all the treasures are gifts from individuals. 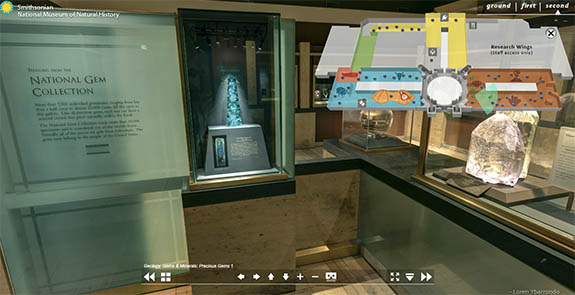 To find the Dom Pedro display, please click this link. The resulting page will be the first of the many Gems and Minerals exhibits. Click twice on the double-arrows on the left of the control panel to toggle to “Geology, Gems & Minerals: Precious Gems 1.” When you arrive, you will see Dom Pedro to the left of the screen.

(You may customize your view by using the directional arrows on the control panel to look left and right, up or down. The plus and minus signs offer closeup and wide views.) 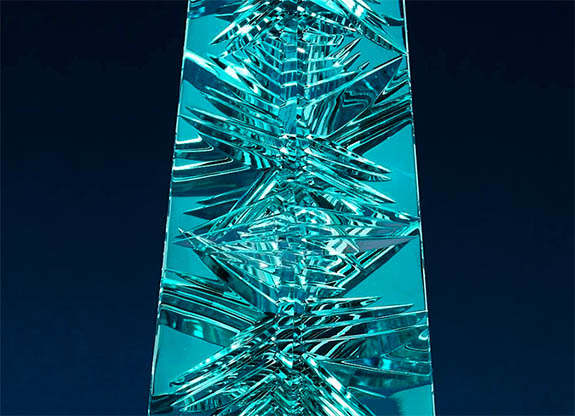 Munsteiner created Dom Pedro by utilizing a unique pattern of tapering “negative cuts,” which are faceted into the two reverse faces of the obelisk. These facets reflect the light, making it appear to glow from within. The vertical “lines” near the base are hollow tubes that formed naturally in the original crystal.

Sourced in Minas Gerais, Brazil, in the late 1980s, the original crystal was almost two feet in length and weighed 57 lbs. 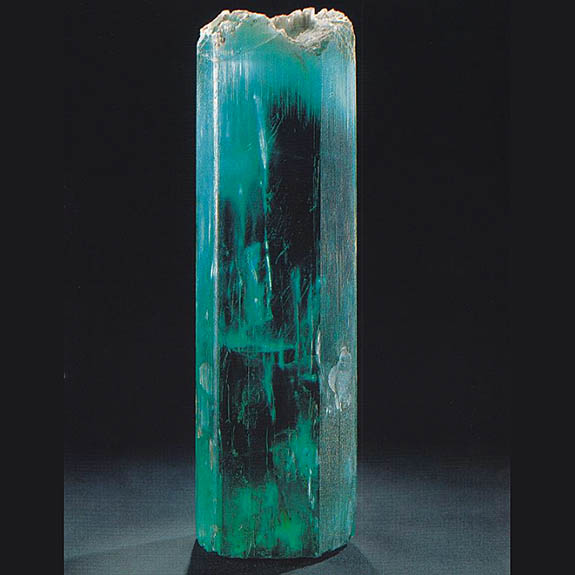 When Munsteiner viewed the rough gem for the first time in 1992, he said, “It was love a first sight!” according to an account at Smithsonian.com. Transforming the rough crystal into Dom Pedro would become the “project of his life.” Munsteiner spent four months studying the rough aquamarine crystal before embarking on a grueling six-month odyssey to meticulously cut, facet and polish the stone.

While cutting the gem completely by hand, he was never concerned with the eventual carat weight. His attention was purely on the beauty and the brilliance.

The finished work weighed 4.57 lbs., less than 1/10th of the weight of the original crystal.

Gem collector Jane Mitchell and her husband Jeffery S. Bland purchased Dom Pedro in 1999 and gifted it to the Smithsonian in 2011.