Can’t Visit the National Gem Collection in DC? Here’s the Next Best Thing

More than six million people pass through the hallowed halls of the Smithsonian’s National Gem Collection in an average year. The collection dates back to 1884 and is the home to some of the world’s most famous gems. But, with all the Smithsonian museums in Washington, DC, temporarily closed to support the effort to contain the spread of COVID-19, we will continue to bring you the next best thing: guided virtual tours of the Janet Annenberg Hooker Hall of Geology, Gems, and Minerals. 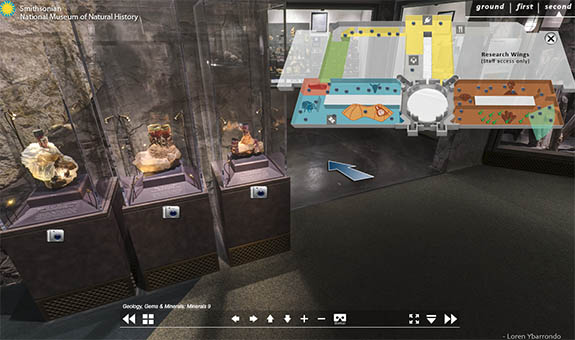 In today’s tour, we will take you to a section of the exhibit that houses a trio of magnificent tourmalines, the most famous of which is called “The Steamboat.”

Here’s how to get there…

By clicking this link, you will see the first of the many Gems and Minerals exhibits. Click multiple times on the double-arrows on the right of the control panel to toggle to “Geology, Gems & Minerals: Minerals 9.” When you arrive, you will see three displays to the left of the screen. The center one houses The Steamboat (see image, above).

You may customize your view by using the directional arrows on the control panel to look left and right, up or down. The plus and minus signs offer closeup and wide views. Clicking on the camera icons in front of the tourmaline exhibits will generate a pop-up snapshot of each specimen.

Standing 11 inches tall and hailing from San Diego County, CA, The Steamboat’s two parallel crystals (which look like steamboat stacks) display a range of vibrant colors that start at vivid reddish-pink at the bottom and transition to a bright bluish-green at the top. The tourmaline crystals rise out of a base of Cleavelandite, which is perched atop a large quartz crystal.

Frank Barlow Schuyler is credited with discovering the fascinating formation at the Tourmaline King Mine in 1907. Three years earlier, Schuyler and a partner, D.G. Harrington, quite literally stumbled upon an enormous pocket of tourmaline crystals while searching for pegmatite in the Pala Chief Mountains.

Schuyler soon discovered that the tourmaline-rich pocket extended 30 feet in length and 10 feet wide, a single zone that would yield about eight tons of beautiful pink tourmaline. Schuyler would eventually sell most of the bounty to the Imperial Chinese government for $187.50 per pound — about $5,148 per pound in today’s dollars.

By 1915, Schuyler was still riding the wave of his tourmaline-based good fortune. At the Panama Pacific International Exhibition in San Francisco, the owner of the Tourmaline King Mine marketed his gems with the slogan, “Wear a tourmaline for luck.” 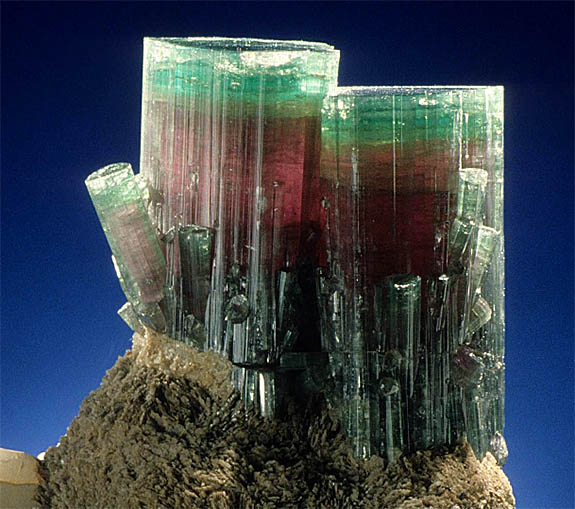 The Steamboat tourmaline was later purchased by master engineer Washington A. Roebling, who included it in his collection of 16,000 mineral specimens. Roebling was most famous for designing the Brooklyn Bridge. Roebling’s son, John, donated the specimen to the Smithsonian Institution, where it is has been on permanent display at the Janet Annenberg Hooker Hall of Geology, Gems, and Minerals, which is part of the National Museum of Natural History.