The second-largest rough diamond ever discovered finally has a name. The 1,758-carat grey-black diamond recovered in April at Lucara’s Karowe mine in Botswana will be known as “Sewelô,” which means “rare find” in the native Setswana language. 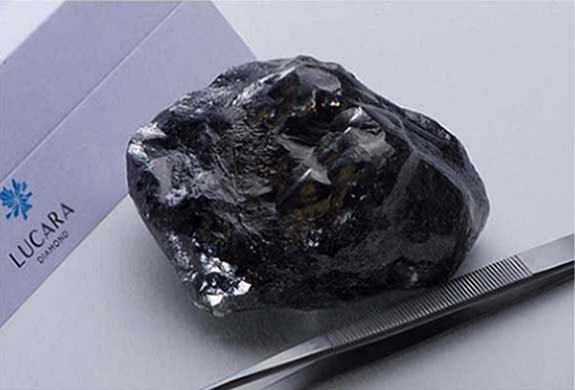 A panel of judges picked Sewelô from more than 22,000 entries in a naming competition that was open to all the citizens of Botswana. Gofaone Tlhabuswe, a 32-year-old from Gabane Village, submitted the winning name and earned the grand prize of $3,000.

The announcement was made during a gala event hosted by Lucara Botswana in the presence of His Excellency Dr. Mokgweetsi Eric Keabetswe Masisi, President of the Republic of Botswana.

“The largest diamond recovered in Botswana’s history was named by the people of Botswana this evening in a celebration of Botswana’s success,” said Eira Thomas, Lucara’s President and Chief Executive Officer. “Lucara is proud to share our achievements with all stakeholders in Karowe and the people of Botswana. We are in the process of completing an analysis of the Sewelô and we look forward to sharing the results of this rare find.”

Sewelô is the size of a tennis ball and weighs about 12.4 ounces. Measuring 83mm x 62mm x 46mm, the rough diamond is being characterized by Lucara as “near” gem quality with “domains of high-quality white gem.” The unbroken 1,758-carat stone was recovered through Lucara’s XRT circuit in April 2019.

Before the advent of XRT technology, diamond-bearing rock was typically drilled, blasted, hauled and put through crushing machines to get to the gems hiding within. During that process, extremely large diamonds, some weighing hundreds of carats or more, were often damaged or even pulverized.

By employing XRT scanners, the mining process has become kinder and gentler. As the rocky material comes down a conveyor belt, the scanners can pick out the diamonds based on their chemical composition. Older scanners used to depend strictly on the stone’s ability to reflect light.

Since commissioning the XRT circuit in 2015, a total of 12 diamonds in excess of 300 carats have been recovered at Karowe, including two greater than 1,000 carats, from a total production of approximately 1.4 million carats. Of the 300-plus-carat diamonds recovered, 50% were categorized as gem quality with the 11 sold to date generating revenues in excess of $158 million.

Lucara is wrapping up its analysis of the Sewelô diamond and is considering next steps toward selling it in a way that has a lasting and positive impact for Botswana, according to the mining company.