On a trip to Indonesia last year, GIA Graduate Gemologist Brian Berger purchased an unusually striking opal originating from the island of Java. Boasting an exciting “play of color” throughout the stone ranging from pale yellow to dark blue, the gemstone was remarkable on its own. But now it has become a potentially significant scientific discovery. Fully encased within the gemstone is an insect. While insects trapped in amber are a more common find, it is almost unheard of in a slow-forming gemstone like opal. 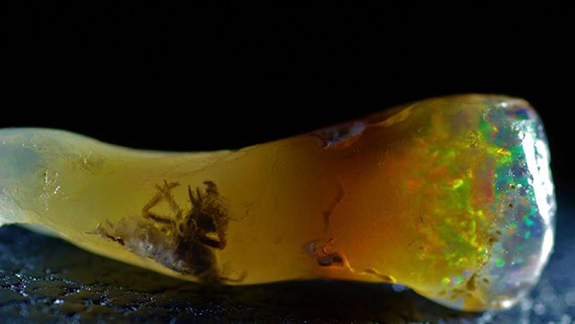 “You can see what appears to be a complete insect encased beautifully inside,” Berger noted in a blog post for Entomology Today. “The insect appears to have an open mouth and to be very well preserved, with even fibrous structures extending from the appendages.”

Berger told Gizmodo: “Some researchers weren’t sure it was possible. Now we know it’s possible. Is it likely? Extremely unlikely.”

According to Ryan F. Mandelbaum at Gizmodo, most scientists believed that high-quality fossil specimens were unique to amber. 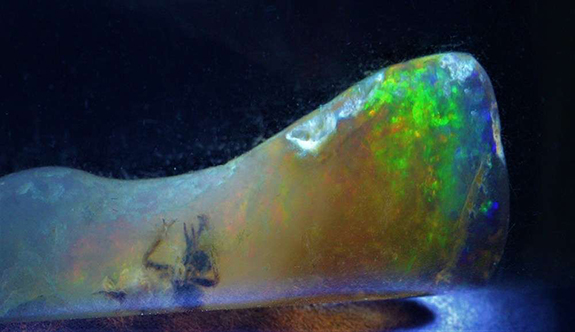 “It’s possible the bug was trapped in amber that then underwent a process known as opalization,” he wrote. “Much like fossilization turns bone into stone, opalization can render organic specimens into opal’s hapless prisoners.”

Entomologist Ryan McKellar, curator of invertebrate paleontology at the Royal Saskatchewan Museum in Canada, told Gizmodo, “It is a pretty neat find, and a bit puzzling.”

Amber is cherished for its contributions to fossil records. Researchers have recovered extraordinary amber fossils featuring spiders, wasps, ants, and even a lizard. According to Vasika Udurawane at Earth Archives, petrified tree resin starts out as a viscous liquid, slowly hardening… and preserving the entrapped remains of creatures that find themselves caught up in the process.

Berger’s find supports the theory that opal can also preserve ancient remains. It has been reported, for instance, that paleontologists in Australia have found an opalized dinosaur fossil.

Michelle Starr of Science Alert noted that researchers still have a limited understanding of opal formation. The dominant theory states that silica-laden water fills cracks and cavities in its path. When it evaporates, it leaves behind silica deposits, starting the slow opal forming process. Starr notes that opalization needs a hollow cavity. Amber does not fit these parameters, leaving scientists wondering how this opal, if it did start out as amber, came to be.

Berger intends to work with an entomologist or paleontologist who can study the opal and its insect inclusion. He had submitted the stone to the Gemological Institute of America, which subsequently issued a report authenticating the specimen as an “unaltered, untampered precious opal, with a genuine insect inclusion.”

“If the process of formation is correct, from tree sap with an insect through a sedimentary process, to copal (resin), to amber, to opal, it could mean the insect has the possibility to be one of the oldest ever discovered,” Berger said.

He plans to donate the specimen to a museum after the analysis.