First discovered in Russia’s Ural Mountains in 1851, the vivid green demantoid garnet is the rarest and most valuable variety of January’s birthstone. 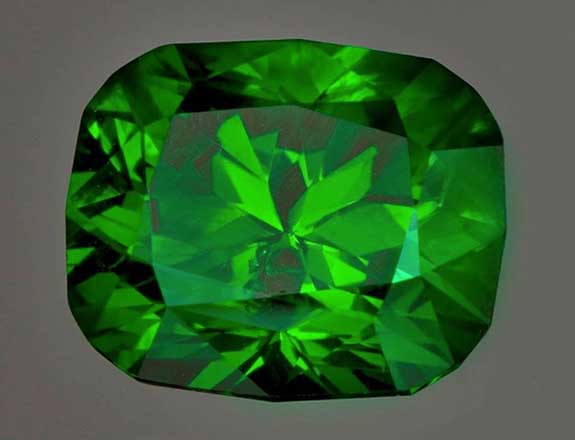 Demantoid is derived from the Dutch word for diamond, “demant.” The stone owes its impressive diamond-like brilliance to two main factors: A high refractive index and a high dispersion (its ability to separate light into the spectrum of colors). Demantoid, in fact, boasts the highest dispersion rating of all gemstones, including diamond.

The green gem was a favorite of designer Carl Fabergé, who incorporated demantoid into the famous jeweled eggs and other fanciful jewelry he created for the Russian Imperial family. Russian mining of demantoid garnet was suspended after the Bolshevik Revolution in 1917, but finally resumed in the 1970s.

Fine-quality demantoid garnets are rarely found in sizes larger than 2 carats, a fact that makes the examples on this page all the more impressive.

The cushion-cut demantoid, above, is a world-class gemstone and one of the largest and finest faceted demantoids known. The 11.24-carat gem was mined in Russia in the late 1990s and exhibits the highly prized vivid intense emerald-green color. The gem joined the Smithsonian Gem and Mineral Collection in 2011.

The 6.96-carat oval demantoid, below, is from the Green Dragon Mine in Namibia and exhibits a medium dark yellowish-green color. It was purchased on behalf of the Smithsonian in 2014 with funds from the Tiffany & Co. Foundation. 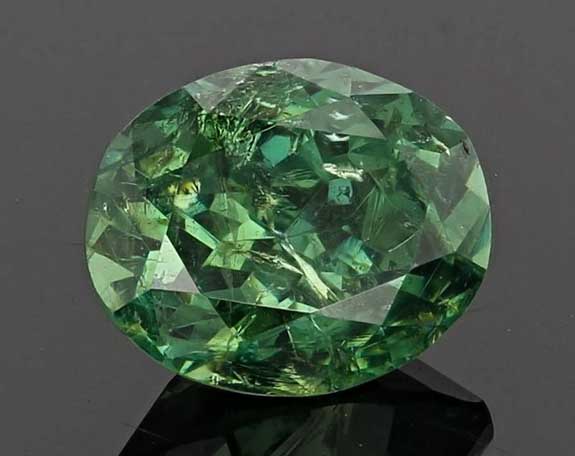 Interestingly, George F. Kunz, who was Tiffany and Co.’s vice president of gemology from 1879 until his death in 1932, was a big fan of demantoid garnets and reportedly purchased all the rough material he could get his hands on.

Demantoid gems are usually high in clarity but may contain distinctive “horsetail” inclusions that seem to spray out from the center of the stone. A beautiful, well-formed inclusion can increase the value of the gemstone considerably, according to the International Color Stone Association.

Demantoid garnet is currently mined in Iran, Namibia, Pakistan, Italy, Madagascar and Canada, but the Russian demantoid continues to set the standard by which all the others are judged.

African-origin demantoid tends to be yellowish-green, olive green or brownish, due to higher concentrations of iron. Russian material, on the other hand, owes its color to chromium and tends to be vivid green.