In the lead-up to yesterday’s highly anticipated auction of the “Pink Legacy,” Christie’s Rahul Kadakia had gone out on a limb and said the 18.96-carat fancy vivid pink diamond was “as good as it gets.” 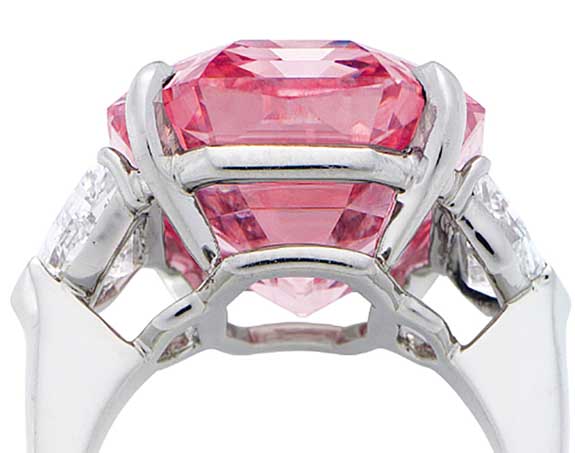 “To find a diamond of this size with this color is pretty much unreal,” said the International Head of Jewellery at Christie’s. “You may see this color in a pink diamond of less than one carat. But this is almost 19 carats and it’s as pink as can be. It’s unbelievable.”

Kadakia’s evaluation was right on the mark as the vibrant, VS1-clarity, rectangular-cut gem was purchased by Harry Winston for $50.3 million, establishing a record price-per-carat for a diamond of that hue.

The hammer price at Christie’s Geneva was at the top end of the $30 million to $50 million pre-sale estimate, and set a new high-water mark for fancy vivid pink diamonds at $2.7 million per carat. The previous record holder was the 14.93-carat Pink Promise, which sold at auction for $2.2 million per carat a year ago in Hong Kong.

“We are proud to continue in the Winston tradition of acquiring the finest gems in the world,” Harry Winston Chief Executive Officer Nayla Hayek said in a statement. The winning bidder also appended the diamond’s name. It will now be known as the “Winston Pink Legacy.”

Once owned by the Oppenheimer family — famous for its connections to the De Beers mining company — the Winston Pink Legacy was discovered in a South African mine about 100 years ago and hasn’t been altered since it was first cut in 1920.

Kadakia said in September that “its exceptional provenance will no doubt propel it into a class of its own as one of the world’s greatest diamonds.”

Despite its impressive $50.3 million hammer price, the Winston Pink Legacy fell short of the world record for the highest price ever paid for a pink diamond — or any gemstone. That honor is still held by the fancy vivid Pink Star, a 59.5-carat diamond that sold for $71 million in 2017.