A tiny diamond found at South Africa’s Cullinan mine is credited with preserving and ferrying an unstable, never-before-seen deep-Earth mineral 400 miles to the surface. 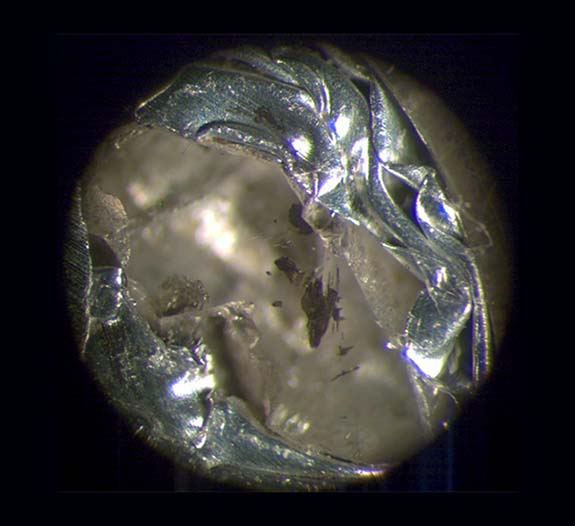 Scientists at the University of Alberta’s Department of Earth and Atmospheric Sciences discovered a minuscule sample of the elusive mineral “calcium silicate perovskite” trapped within the rough diamond that measured only .031 millimeters in diameter. It was polished to give researchers a clearer view of the inclusion trapped inside.

Calcium silicate perovskite is believed to be the fourth-most-abundant mineral on Earth and makes up as much as 93% of Earth’s lower mantle. Despite being so plentiful, scientists could only hypothesize its existence. Nobody could actually see it because the mineral’s crystal lattice deforms as it moves toward the surface.

While most diamonds are formed under intense pressure at a depth of 93 to 124 miles, the diamond encasing the calcium silicate perovskite was likely formed 400-plus miles below the surface. The pressure at that depth is equivalent to 240,000 times the pressure at sea level.

Diamonds can be blasted to the surface during volcanic eruptions. The vertical superhighways that take the diamonds on their journey are called kimberlite pipes.

“Diamonds are really unique ways of seeing what’s in the Earth,” Pearson said.

The mineral’s composition was confirmed by X-ray and spectroscopic analysis. Future research will focus on the age and origin of the material.

The scientists also noted that chemical clues found in the diamond reveal that it formed out of the remains of oceanic crust, supporting the theory that the Earth undergoes a recycling process that brings crust material into the deep mantle.

Researchers at the University of Alberta published their findings in the journal Nature.