The Philadelphia Eagles marked their historic 2017 season and epic Super Bowl triumph over the New England Patriots with championship rings emblazoned with 219 diamonds and 17 green sapphires. Each ring boasts a gemstone total weight of 9.15 carats. 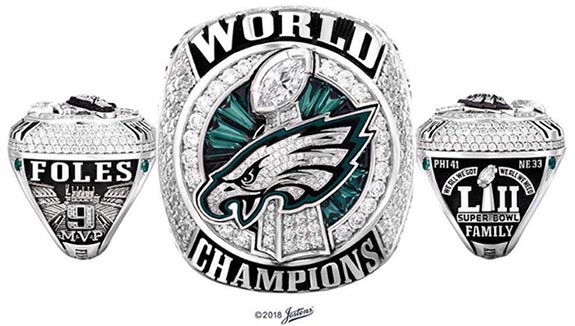 The 10-karat gold rings are teeming with symbols on every surface to tell the story of an underdog team that overcame all obstacles to roll through the playoffs and eventually defeat the Tom Brady-led Patriots by a score of 41-33 in Super Bowl LII. It was the first time the Eagles raised the Vince Lombardi Trophy aloft in their 85-year history.

The top of the ring features the iconic eagle head logo rendered with 52 pavé-set diamonds to signify Super Bowl LII (52). The eagle head is set atop the Lombardi Trophy, which is, in turn, layered over a series of tapered-baguette green sapphires, fanned out in a circle. Ring manufacturer and designer Jostens noted that the rare green sapphires were specially sourced to match the official team color. The 13 sapphires represent the Eagles’ 13 regular season victories, which tied a franchise record.

The top of the trophy is adorned with three diamonds, representing the number of times the Eagles were deemed underdogs, and also the number of post-season victories it took to be crowned World Champions.

A large marquise-cut diamond sits majestically at the top of the Lombardi Trophy to represent the first Super Bowl Championship in the Eagles’ franchise history. Bordering the top and bottom of the top of the ring are the words “WORLD” and “CHAMPIONS” in raised white-gold lettering against a black enamel ground.

The ring’s bezel is adorned with a waterfall of 127 diamonds, a number that pays tribute to one of the most exciting and memorable moments in the team’s history. “The Philly Special” was a trick play that resulted in a touchdown on a fourth-down-and-goal situation at the opponent’s 1-yard line. Three key Eagles were involved in the memorable play, and the number 127 is the sum of their jersey numbers — Corey Clement (30), Trey Burton (88) and Nick Foles (9).

Four round, genuine green sapphires adorn the corners of the base of the ring and symbolize the team’s four NFL Championships – three World Championships (1948, 1949, 1960) and one Super Bowl Championship (2017).

The left side of the ring prominently shows the player’s name set above an end zone view of Lincoln Financial Field, the home of the Eagles. The stadium graphic pays tribute to the passionate and dedicated fan base that has supported the team since its formation. The player’s number is studded with pavé-set diamonds and set in the middle of the rendered football field.

The right side of the ring features the score from Super Bowl LII (PHI 41 – NE 33), and one of the team’s messages of unity throughout the season, “We All We Got, We All We Need,” is set above the Super Bowl LII logo. The word “FAMILY” sits below the logo and serves as a reminder of the team’s commitment and dedication to each other.

The words from the team’s fight song, “Fly Eagles Fly” are written on the bottom of the outer band. The top of the inside arbor of the ring is inscribed with the scores from the team’s three postseason victories and an image of an underdog mask, an acknowledgement of how the Eagles embraced their underdog role to galvanize the team, the fans and the entire city of Philadelphia. The bottom of the inside arbor is inscribed with each player’s signature – the first time championship rings have ever featured engraved signatures.

Eagles chairman and CEO Jeffrey Lurie admitted that he didn’t realize the level of consideration that goes into the design of a Super Bowl ring.

“I thought, ‘You know, you just sort of come up with some ring, and you make many, and you have a party,’ Luria said in a statement. “I never really thought of the details that were required. You go through so much during a season. What are the statements that you want to make about the team, about the season, about the kinds of players and coaches that we had? It’s kind of like, how do you want to be remembered 20 years from now?”

The Eagles players and coaches received their rings during a special ceremony last week. In all, more than 400 rings were distributed to key personnel at every level of the Eagles organization.