For $145 Million, You Can Pop the Question While Orbiting the Dark Side of the Moon

Starting in 2022, the French ApoteoSurprise agency will be offering a week-long “Marriage Proposal Around the Moon,” which will literally launch couples into space on a 500,000-kilometer journey to the moon and back. 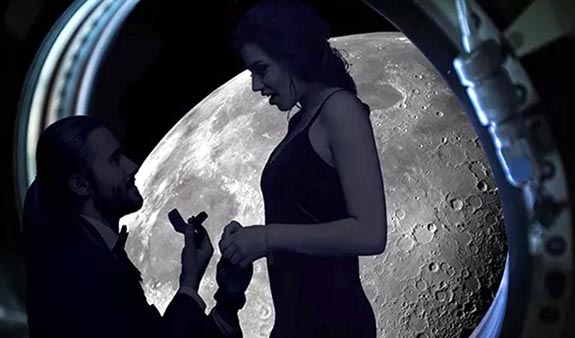 Priced at $145 million, the proposal package includes all the requisite training and a few romantic touches along the way. The self-flying spacecraft, which will take off from Kennedy Space Center at Cape Canaveral, Fla., will allow the lovers to travel without a pilot.

As their autonomous spacecraft accelerates off the launch pad, the couples will experience 3G forces. But, soon the agitation will give way to calm, according to ApoteoSurprise, as the first effects of weightlessness are felt. At that moment, Richard Strauss’s “Thus spoke Zarathustra, Op.30” (Theme from 2001 Space Odyssey) will be relayed to the space lovers’ helmets.

The craft will survey the surface of the moon at an altitude of only 200 to 300 kilometers and then the spaceship will slow down and disappear behind the hidden face of the moon. For about 30 minutes, all communication with the Earth will become impossible, and now alone in space, the suitor will be ready to propose to his beloved as nobody has done before.

“Fly Me to the Moon” by Frank Sinatra will be played in the couples’ headsets, as the future groom pulls the engagement ring out of the box that he secretly hid in his spacesuit.

Once the craft emerges from the dark side of the moon, planet Earth will be rising on the horizon and communications with the Space Center will be re-established.

When the spacecraft approaches the Earth’s atmosphere, the temperature of the heat shield will increase considerably, so that a bright plasma trail will be visible through the portholes, according to ApoteoSurprise. Halfway to the stratosphere, deceleration will get close to 5G, but then a few minutes later, the parachutes will be deployed and retro-rockets will allow the space capsule to land smoothly. Eight cameras will immortalize the trip from every angle.

The training component of this adventure is no walk in the park. It demands three months of intense preparations, including cardio training sessions, high-G training in a centrifuge, acclimation to microgravity through a series of parabolic flights on board a Boeing 727, acclimation to high accelerations and speed changes on board a fighter jet flying over Mach 2, complete presentation of the spaceship and of the flight schedule, stress management strategies and emergency simulations.

Founded in 2006 by aeronautical engineer Nicolas Garreau, ApoteoSurprise offers 30 all-inclusive proposal packages, including the surprise appearance of Cinderella’s carriage with its magical glass slipper, 1,000 roses raining down on a yacht during a dinner cruise, a carrier dove sent to the beloved’s home, a limousine ride to see a giant love message light up at the foot of the Eiffel Tower, or even the deployment of an aerobatic display team to draw a huge heart in the sky.