Welcome to Music Friday when we bring you fun songs with jewelry, gemstones or precious metals in the title or lyrics. Today, rocker Chris Isaak’s promising new relationship hits a speed bump in his 2002 release, “Notice the Ring.” 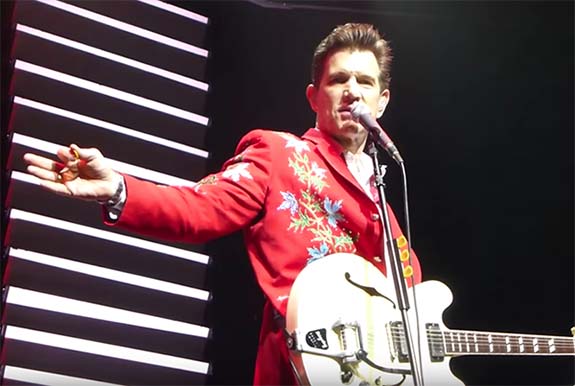 In this song, Isaak’s character is having a great time getting to know a woman he just met at a club. The chemistry is right and this could be the beginning of something special, but Isaak notices a diamond ring on the woman’s finger. Is it an engagement ring, a piece of fashion jewelry or a sentimental bauble that was handed down from her grandma?

While introducing this song at his concerts, Isaak offers light-hearted advice to the men in the audience.

“When you meet a woman for the first time, it’s important to focus on her hands. Not the whole body, but the hands,” Isaak joked. “Look at the hands and they will tell you so much about a person. Particularly, notice the ring.”

Penned by Isaak, “Notice the Ring” appeared as the eighth track of the artist’s eighth studio album, Always Got Tonight.

The singer-songwriter, musician, actor and talk show host is best known for his soaring falsetto, 1950s Rock and Roll style and his song, “Wicked Game,” which was featured in the 1990 film, Wild at Heart.

The son of a potato chip factory worker mom and a forklift driver dad, Isaak was born in Stockton, Calif., in 1956. His mom claims that Isaak showed musical intuition at eight months of age. She noticed that he would be moved by the sad country songs that played on the radio. Isaac started his first band in 1984 and was signed by Warner Bros. one year later.

Fun Trivia: Isaak was an amateur boxer and had his nose broken seven times, according to Discussions Magazine. At the time, his good looks and combed-back hair earned him the nickname, Elvis.

We hope you enjoy the audio track of Isaak performing “Notice the Ring.” The lyrics are below if you’d like to sing along…

“Notice the Ring”
Written and performed by Chris Isaak.

You’re talking, I’m listening,
But I don’t hear a thing
Is it something he bought you
Or only a ring, oh baby

I notice the ring, we gotta slow down
She’s laughing, stop worrying
Get in the swing
Heart pounding, I’m wondering
Just what did she mean

Say nobody’s waiting
That’s it’s nothing just gold plating
That it really doesn’t mean anything
Say your grandma left it to you
Just all you need to do is tell me that it’s no wedding ring,
Nice diamond