A series of groundbreaking discoveries have the science community singing the praises of diamonds — especially the ones with inclusions. One physicist compared the precious gemstone, which can ferry material to the surface from hundreds of miles beneath the Earth’s crust, to a “tiny indestructible spaceship.” 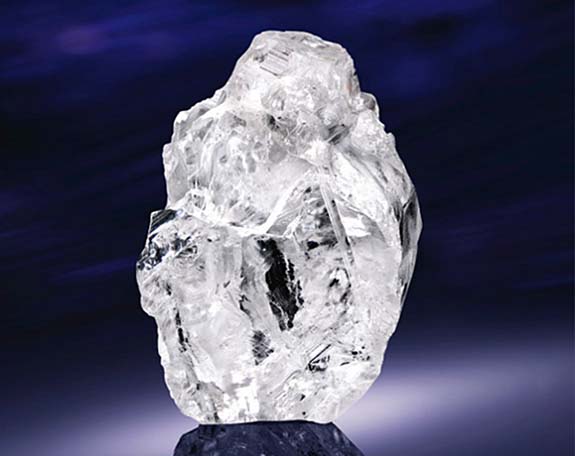 A few weeks ago, we reported on a never-before-seen deep-Earth mineral — calcium silicate perovskite — that had traveled to the surface trapped within a diamond. The unstable material would have normally deformed as it moved to the surface, but within the body of diamond, it remained intact.

Then we learned about the discovery of ice-VII, a type of water ice that forms under enormous pressure. Previously, scientists theorized that ice-VII likely existed in great abundance in our solar system, but they did not think it could naturally occur on Earth. That thinking was turned upside down when traces of the unique crystallized water was found encapsulated in a diamond.

Both the calcium silicate perovskite and ice-VII originated 400 miles deep within the Earth’s crust and rode to the surface in volcanic eruptions as diamond inclusions. Neither could have survived the massive pressure change outside the protection of the diamond.

“Diamond is a remarkable vessel for sampling the geochemistry of the deep mantle,” Steven Jacobsen, a mineral physicist at Northwestern University, told EOS.org, “because of its ability to seal off trapped inclusions from the reactive environment during ascent, like a tiny indestructible spaceship.”

As diamonds form hundreds of miles beneath the Earth’s crust, tiny bits of their surrounding environment can be trapped inside. What’s particularly unique about diamonds is that the inclusions will remain under the same pressure as they were during the time they were encapsulated.

“The diamond lattice doesn’t relax much, so the volume of the inclusion remains almost constant whether it’s in the Earth’s mantle or in your hand,” noted Oliver Tschauner, a professor of geoscience at the University of Nevada, Las Vegas.

A press release provided by the university explained that in the jewelry business, diamonds with impurities hold less value. But for Tschauner and other scientists, those impurities have infinite value, as they may hold the key to understanding the inner workings of our planet. In the most recent case, they revealed that aqueous fluids reside deeper in Earth than anyone ever expected.

The once-elusive ice-VII has 1.5 times the density of Ice-I, which is the type of ice we might put in a soft drink. Ice will progress from ice-I to ice-II, and so on, based on differing pressure and temperature conditions.

“These discoveries are important in understanding that water-rich regions in the Earth’s interior can play a role in the global water budget and the movement of heat-generating radioactive elements,” Tschauner said. “It’s another piece of the puzzle in understanding how our planet works.”