Measuring barely 1.5 inches across and carved with astonishing skill, this 3,500-year-old sealstone is considered one of the finest works of prehistoric Greek art ever discovered.

Emerging from the surface of the agate is a finely detailed battle scene showing a victorious warrior who, having already vanquished one unfortunate opponent sprawled at his feet, now turns his attention to another much more formidable foe. Some of the elements are so incomprehensibly small that they must be viewed with a magnifying glass or via photomicroscopy to be truly appreciated.

The agate masterpiece had been unearthed from the burial site of a Bronze Age Greek warrior near the ancient city of Pylos more than two years ago by University of Cincinnati researchers. At the time, the treasure-laden tomb of the "Griffin Warrior" was hailed as the most spectacular archaeological discovery in Greece in more than half a century.

Recovered from the grave were more than 3,000 items, including four solid gold rings, silver cups, precious stone beads, fine-toothed ivory combs and an intricately built sword, among other weapons. 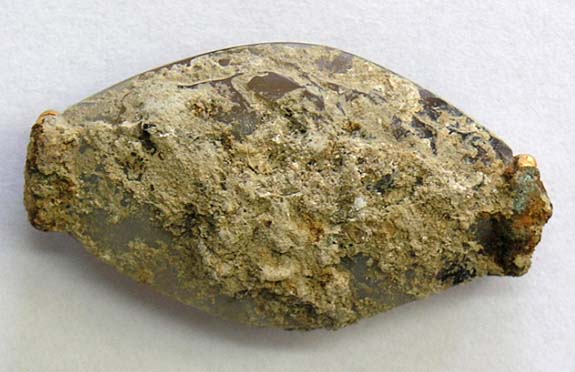 The agate had been put aside for later review because it was caked with limestone and looked like an average bead. But, when researchers finally completed the task of removing 3,500 years of sediment, what was emerged was so amazing that many team members were overcome with emotion. 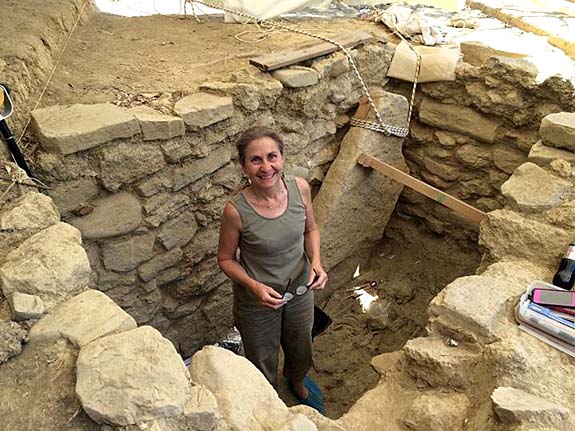 "Looking at the image for the first time was a very moving experience, and it still is," said Shari Stocker, a senior research associate in UC's Department of Classics. "It's brought some people to tears." 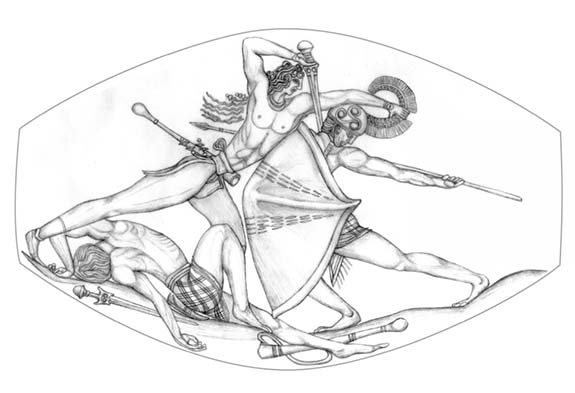 A sketch of the artwork offers a clearer picture of the characters depicted in the carving.

Researchers believe the "Pylos Combat Agate" was a sealstone that the Griffin Warrior wore as a bracelet around 1450 BC. He likely pressed the raised image into clay or wax. He was dubbed the Griffin Warrior because he was buried with an ivory plaque depicting a griffin — a mythical beast with the body of a lion and head and wings of an eagle.

"What is fascinating is that the representation of the human body is at a level of detail and musculature that one doesn't find again until the classical period of Greek art 1,000 years later," explained UC archaeologist Jack Davis. "It's a spectacular find."

Stocker and Davis noted that the skill and sophistication reflected in the Pylos Combat Agate is unparalleled by anything uncovered before from the Minoan-Mycenaean world.

"It seems that the Minoans were producing art of the sort that no one ever imagined they were capable of producing," explained Davis. "It shows that their ability and interest in representational art, particularly movement and human anatomy, is beyond what it was imagined to be."

The Pylos Combat Agate is the subject of a paper to be published later this month in the peer-reviewed journal Hesperia.